The Rich’s chess team completed a busy term on Monday 15th December with victory in the league over EDF Energy. As far as I can remember, this is the first time we have beaten the works team from our major local employer.

This term has seen the school team compete in 15 matches (6 long-play and 9 rapid-play). Although we have found the competition stiff when playing local adult club teams, we have done exceptionally well against other school teams. Notable matches include victories against Hereford Cathedral School, Bristol Grammar School, Vandyke Upper School (Bedford) and St Pauls Girls School (London), a drawn with Eton College, and we have been beaten by only 2 schools, Millfield (Somerset) and Haberdashers Askes (Hertfordshire).

In the National Schools Knockout we are through to the South-West Regional semi-finals, with a match against Monmouth School scheduled for mid-January.

At rapidplay chess, we won the local schools competition (with Pates second and Crypt third), came second in the Gloucestershire/Somerset regional competition (Millfield were first), and came 13th in the ECF National School’s Rapidplay event held at Eton College in September.

Within STRS, 45 boys from Y7&8 played in a knockout competition held during lunchtimes in September and October. In total over 100 games were played before Scott Grint (8T) beat Charlie Nicholson (7R) in the final. House chess was won by Westgate, played over 3 lunchtimes in November.

So a busy term comes to an end, but we will be back in action on Tuesday 6th January with an away evening league match at Cirencester Chess Club. 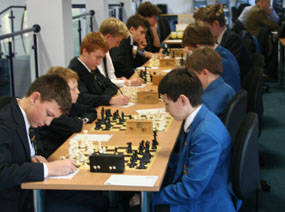