Sir Thomas Rich was born in Gloucester in 1601 as the entry in the Baptismal Register of St John's, Northgate shows. He was sent to school in London and after studying at the newly founded Wadham College, Oxford, worked in the city of London in the wine importing trade. He bought the manor of Sonning, near Reading, and become MP for Reading. He was created a baronet by Charles II.

In his will of 1666 he left his Gloucester house in Eastgate and £6000 to establish a school in Gloucester for twenty poor boys. The money was mainly invested in farm land and the rent was to pay for the running of the school. The school was opened in 1668 one year after Sir Thomas Rich's death. He was buried in the parish church at Sonning and his ornate tomb may be seen under the church tower.

The school, known as the Blue Coat Hospital, was to be run on the lines of Christ's Hospital and a master and matron were appointed to teach and care for the boys. The school is shown in the Kip engraving of Gloucester of 1712 close to the Barley Market that stood in Eastgate Street. One of the key features of the bequest was that money was provided for apprenticeships once the boys had left school so good employment was guaranteed and this meant that the school was always full. When the master was out from the school the boys were supervised by the oldest boy who was known as the Observator.

The traditional Blue Coat uniform was worn. This consisted of a navy blue drugget coat, yellow stockings, leather belt, white collar and tabs and each boy wore a numbered silver medallion. We possess several of these medallions and photographs of boys in this uniform.

The school continued to use the Rich house until 1807 when new school buildings were erected on the same site. We have paintings of both the interior and frontage of these buildings.

In 1882 the name of the school was changed from the Blue Coat Hospital to Sir Thomas Rich's School and the old uniform was abandoned for one initially requiring only a cap and the Rich crest for a badge. By now the school had increased in size to a hundred boys, some coming in from the surrounding villages, and three masters. So larger premises were needed and the school moved in 1889 to Barton Street. On the old site the Guild Hall was built.

The Barton Street site contained the School House, which still stands, and linked to it a hall which doubled as a gymnasium, several laboratories, an art room and woodwork room, a library and a number of class rooms. Other class rooms were scattered over what is now a car park. Richians who remember those buildings will not be surprised to learn that when the school was inspected in 1950 the premises were described as the worst in the south west of England! By 1904 there were three hundred boys in the school although some of the ablest still moved to Christ's Hospital with scholarships. It was not until 1925 that there was a sixth form and in 1930 eight boys went on to university.

In the late 1940's the City Council acquired Elmbndge Farm, Longlevens. On some of the land houses were built but on part of it the school was provided with its first permanent playing field. So when eventually the City was able to adequately accommodate the school the new buildings were opened at Elmbndge in1964.

The tercentenary in 1966 was celebrated by an appeal which enabled a swimming pool to be added to the impressive new facilities, the statue of a blue coat boy was placed on a rock in the quad and the school was granted its own coat of arms. Soon after the bowls green was laid.

Few changes to the fabric of the school occurred in the next decades, partly because of successive plans to reorganize secondary education but there were other changes not least the first intake of girls into the sixth form in 1987 when Colwell School closed.

Then in 1994 the swimming pool was rebuilt with grants and gifts, the foyer was refurbished by the Old Richians Association and the new library and computer rooms were built under the arches. In 1996 the new quad with ten classrooms and sports hall was added and in 1998 the latter was doubled in size. In 1999 the music suite was built and in 2002 the W. J. Veale Language Centre was opened.

These developments complemented a succession of outstanding inspection reports by HMI and Ofsted and the school was the first secondary school in Gloucestershire to be give Beacon status. The publication of league tables have enhanced its reputation both locally and nationally but as David Watkins writes in the School History.

" ... the true worth of any school must ultimately be judged on the attitudes and ideals of its 'average' product". 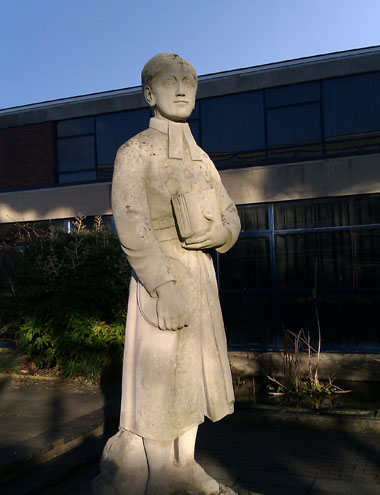