Chairman of Governors presented with MBE

Janferie Wilton, from Gloucester, is made an MBE by the Duke of Cambridge during an Investiture ceremony at Windsor Castle.

Witnessing the investiture of our Chairman of Governors, Miss Janferie Wilton, at Windsor Castle has helped make this an especially happy week at Sir Thomas Rich’s. Everybody here is so pleased and it has been fantastic to receive messages of congratulation from members of the School Community.

The Gloucester Citizen wrote:
“A prominent figure in education in the county was today one of two people to collect honours bestowed upon her in the Queen’s Birthday Honours earlier this year.

During an investiture ceremony at Windsor Castle, Janferie Wilton, from Gloucester, received her MBE off the Duke of Cambridge for services to education.
The chairman of Governors at Sir Thomas Rich’s School in Longlevens received the honour at the same ceremony as Jon Doney, of Tewkesbury, who was made an MBE for services to British show jumping.”

“I am absolutely delighted to be here to witness this very special event in the life of the School. I am most fortunate to have such an experienced Chairman of Governors who is so committed to the School. I was thrilled to hear her describe the School as a rather large but happy family to Prince William when he asked her why she has been a Governor for almost forty years” 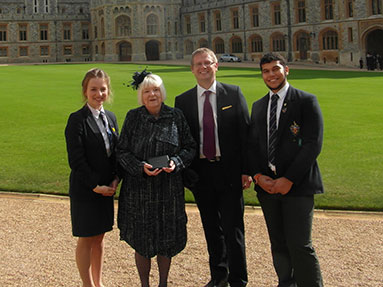