45 year 9 boys and 4 staff visited The First World War battlefields of Flanders and the Somme on the School’s seventh annual battlefields trip. This year’s trip was particularly moving as we were able to find the grave of the great grandfather of our students who laid a wreath there (see picture) supported by many of his friends. Several other boys found the names of their relatives on the memorials at the Menin Gate and Tyne Cott. As usual, we paid tribute to the memory of D.G. Hine (Ex Richean, see picture) who died at Ypres and whose body was never identified. He is one of the thousands, "Known only to God" 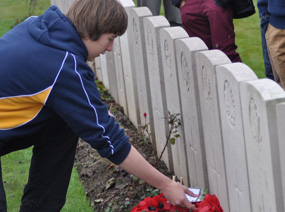