The Rich's chess team travelled to Eton College on Sunday 18th September to take part in the ECF National School's Rapidplay Championships. 50 teams took part representing the main chess-playing schools in the UK with representatives from as far afield as Yorkshire, Kent and Wales, as well as two overseas entries from Dublin.

Rich's were seeded 16th, and won our opening match emphatically 6 – 0 against one of the weaker teams. In round 2 we were drawn against the top seeds Millfield. We competed well and we had good chances in 4 of the games, but they were too strong, winning 5½ – ½. Round 3 was a disappointment for the Rich's boys were we collectively made far too many mistakes losing 4 – 2 to RGS Guildford's B team - this was a match we really should have won. Round 4 saw us take on Nonsuch School in Surrey, a large girl's grammar school. Rich's regained our composure and played some excellent chess winning 5 – 1. In the final round we were drawn against KES, perhaps the strongest school in Birmingham. A hard-fought match resulted in a 3 – 3 draw.

The Rich's team was Michael Ashworth (13H), Robert Ashworth (11B), Anthony Ifeacho (13C), Danny Howlett (7S), Matthew Munden (13R) and George Hawthorne (11T). Congratulations to George on his debut for the school team, and especially to Danny who played well for the school after only 2 weeks with us.

The final standings of the top 25 schools are given below. Rich's were placed equal 18th tied with Brighton College. Gonzaga College from Dublin were surprise winners of the competition, winning on tie-break over Hampton School. Millfield in 3rd place being the best from the West of England.

The playing hall at Eton College. Rich’s are taking on Millfield in the top match of round 2 (on the stage). 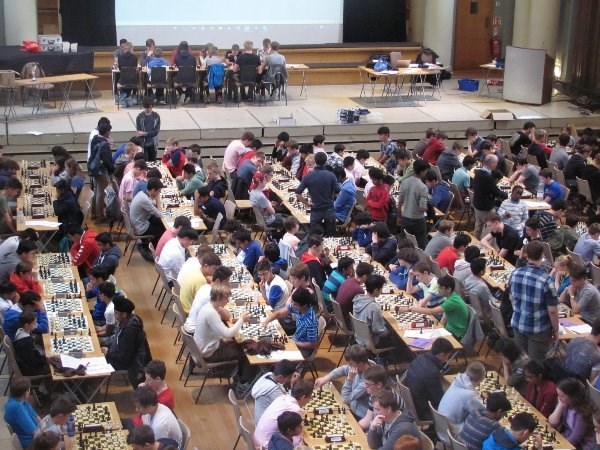