On Tuesday 23rd September we were pleased to welcome the Onatti Productions Theatre Company to Sir Thomas Rich’s to deliver the first of its foreign language plays this year, “Erreur d’identité”. The company uses professional actors who are native speakers and specialises in providing theatre for schools in foreign languages. A combination of familiar language, repetition and visual prompts enable pupils to follow the story. On this occasion, the scene takes place in a rundown hotel, which is rather reminiscent of Fawlty Towers. Guests are a rare occurrence. When one eventually arrives, he is mistaken for an escaped criminal, resulting in some hilarious and confusing scenes. One pupil takes the part of a journalist writing down from dictation a glowing but totally inaccurate advertisement for the hotel and another pupil assumes the identity of the missing guest who is lying dead behind reception. Both performances received tumultuous applause from the audience.

This play was quite challenging, especially for the younger students, and we were impressed by their level of concentration and understanding 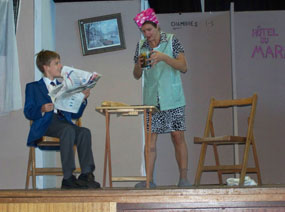