The School's 7-a-side teams have had a very successful year, the highlight being the double success at the Gloucestershire 7s held in Bristol on Thursday 17th March. The U16s played at Bristol GS and won their group beating Crypt, Bristol GS and Bristol Cathedral Sch. They then beat Bristol GS in the semi-final before going on to beat Clifton College in an exciting final.

The U18s playing at QEH Sch on the opposite aside of the road won their group beating Clifton Coll, Beaufort Sch and North Somerset Coll in the process. They beat QEH in the semi- final stage and then played their best 7s of the afternoon to run out comfortable winners of the final against a useful Clifton College squad who had beaten Dean Close previously in their semi-final. Very well done to both squads on this very rare achievement. 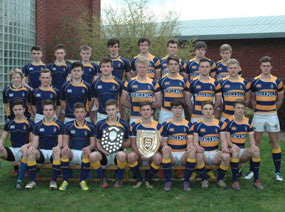