After the very enjoyable French play performed earlier in the term to an audience of pupils in Years 8-10, we were pleased to offer our younger learners the opportunity to see another French drama from the Onatti Company. The cleverly written play, delivered in a mixture of French and English, and involving much pupil participation, was a resounding success, giving the pupils the opportunity to hear a lot of spoken French and enjoy an excellent piece of drama.

The year was 1540. A young English knight has been sent to France by King Henry VIII.
His mission is to find a beautiful French young lady to be the King's fourth wife!
Once he has found one he must paint her portrait and return to England. Easy? No.
He only knows a little French and he has never painted in his life!

The humorous scenarios and clever integration of English into the French scenes entertained the audience from start to finish.

Congratulations to “Onatti Productions” for yet another superb play and also to the four budding Year 7 actors from Sir Thomas Rich’s, Ben Burwell, Robert Booth, Luke Carr and Jack Walker, for their impressively confident performances 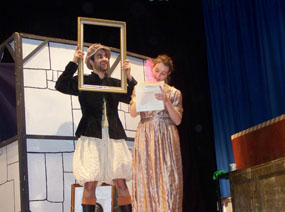