We have been delighted this term to welcome a number of former Rich's pupils into the Modern Foreign Languages department to share their experiences of learning languages post STRS. Our pupils were able to listen to informal talks in open question and answer sessions. These include Matthew Lee, a medical student who talked about his gap year in Austria where he learnt invaluable skills such as effective communication, taking responsibility and decision-making, which helped him secure his place as a Medical Student at Cardiff University.

Theo Tolman- Michael, who is currently reading French and Spanish at the University of Birmingham and just back from his year abroad in Valencia, spoke to our French and Spanish sixth form classes. In addition, we were visited by Poppy Watson who is reading German and Law at the University of Birmingham and also Emma Coleman, who is reading German and Russian at the University of Bath. Poppy is currently attending a German Law summer school in Münster and is due to start her year abroad at Freie Universität in Berlin in September. Emma will be in Hamburg where she will be working as an SEO and Marketing Intern at Casamundo GmbH.

Finally, we were also joined yesterday by Beth Grant who has just graduated with a First Class Honours Degree in German and Management Studies at the University of Reading. As part of her course, Beth had the opportunity to spend six months at the University of Düsseldorf and then a further six months on a work placement in Heidelberg with the German company, SAP. She has now secured a position in London with the same firm and is really excited about the career path that studying languages has provided. We are immensely proud of our former pupils and are dedicated to ensuring that we maintain strong links with them. We wish them every success in the future and hope they will visit us again soon. 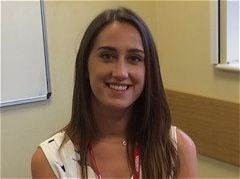 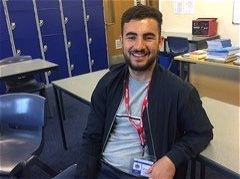