The Play “Mon père ne me comprend pas” was as entertaining as it was educational, a treat for students of French in Years 8 - 10 to immerse themselves in the language whilst at the same time enjoying a first class piece of drama. The problem of coping with one’s parents found resonance both with the pupils and teachers who viewed the scenarios from a rather different perspective.

What teenager has not wished for different parents? Parents can never get it right. Sometimes they are accused of being too strict, sometimes of being  too cool or not cool enough, frequently of not understanding. The play “Mon père ne me comprend pas” relates just such a story. The main character Helène is horrified with the gifts her father gives her for her birthday and reminds him she is no longer 9 but 15 years old. A pink pencil case and a magic wand “une baguette magique” are really not what a 15 year- old girl wants for her birthday. However, with this wand she discovers that she can re-invent her father. The first transformation is a modern, lenient father who grants her every wish, the second a young father who gorges on fast food and vomits over her new clothes. A favourite drama teacher emerges as the third re-incarnation. The drama rehearsal in which Max Chatterji (8R) played the important role of boyfriend and Will Rees (Y12) the role of his girlfriend certainly made the audience laugh. The final appearance of the father as the mother caused equal amusement. Yet none of these characters could replace her kind-hearted, rather old-fashioned father.
Be careful what you wish for! Perhaps this funny play did have a message for us - appreciate what you have. 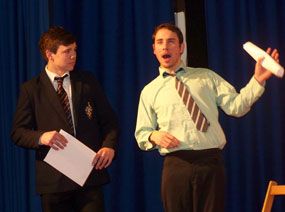 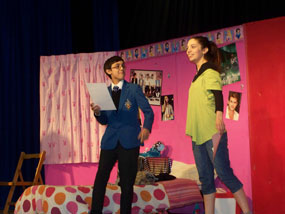 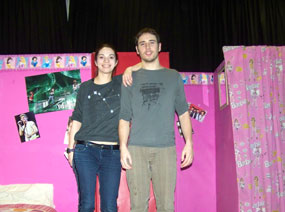