We arrived at Gloucester University on Wednesday in anticipation and slight concern. It was the first time we had entered this competition, and we had absolutely no idea what was to come over the next 6 hours, except that we'd be set a STEM task and have to complete it.

We had 2 groups of four enter this competition. My group consisted of myself, Tom André, Dan Christie and Blake Mainwaring-Taylor, and the other group had Ryan Birch, Sam Huck, Aaron James, and Irfaan Jeeva.

We went into the sports hall, where the event was to be held, and sat down at our allocated seats. There then was a short talk by the organiser of the event, explaining how the day and task would progress. We had to build a device that carried a small load at least 2 metres over a 'river', and dropped it on the other side. Sounds simple, in principle, but the countless criteria and rules had us scratching our heads from the off, and the paperwork we had to complete also added to the pressure. Immediately, we gave each team member a specific task, for example to look at the criteria and problems or to take the necessary measurements. The groups got to work and began scribbling ideas down, all under the constant watch of the judges.

By 11 o'clock, we had a couple of workable and detailed designs, and having quickly decided on the one we thought was best, hurried to finish the paperwork before the deadline. Then followed a tense lunch break, where we discussed how the morning had gone, and how we were going to build our designs in the small space of an hour. That hour soon began, and we worked together to build all the parts we would need, finishing the design with 10 minutes to spare. Then came the moment of truth – the testing stage. We placed our device onto the rig, and turned it on. To our great delight, it functioned perfectly without a hitch; this was a huge boost to our self-confidence.

We watched as the other schools attempted to get their designs to work during the official, judged testing. Very few were able to successfully move, let alone carry the load. The judges were impressed by our design, as once again it worked perfectly.

Then followed a nervous wait as the judges deliberated and decided on the top three. They would be judging us obviously on the success of our designs but also on how well we worked as a team and the detail and quality of our paperwork. We were delighted when we learnt that our group had won and the other group had come third, separated by a team from Chipping Campden School. We happily collected our gold and bronze medals, and the various prizes, exhausted after a days' hard work but elated at our success.

Participating in this competition was an excellent experience for all of us; we all learnt how to work efficiently in a team under pressure and communicate well to complete the tasks set, and the victory made this a highly worthwhile experience. 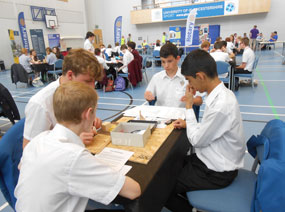 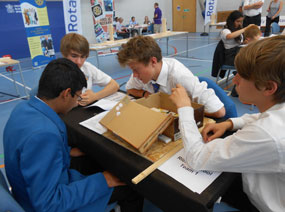 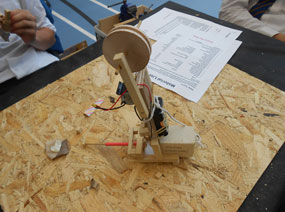