Congratulations to the five pupils from year 9 who participated in the Modern Foreign Language Film competition at Bristol University on Friday. The competition was run by the ALL, the Association of Language Learning, and attracted entries from the whole of the South West. Five entries were selected for the finals. All teams were commended for the many hours they had committed to writing, filming and editing the scripts and the standard of language produced. One entry stood out, that of Sir Thomas Rich. Following in the footsteps of Arthur Conan Doyle, the students produced a cunning Sherlock Holmes story in French. The characters were well cast, the script well written and acted and the filming very professional. The premiere of the film took place at a Language conference in London in February where it was highly applauded. The School is very proud of their achievement. 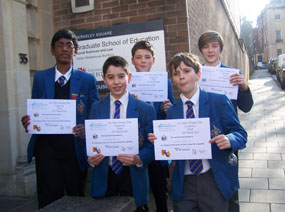