The first day saw the teams battling to get out of two groups, and in dramatic circumstances (that saw a try scored a second after the final whistle had blown chalked off) two teams from Upper 6th – Cardiac Arrest and The Red Hot Chilli Steppers, a lower 6th side – Westgate Warriors and the Untouchables made up of staff members qualified for the finals on the following day.

The first semi-final pitted tournament favourites – The Red Hot Chilli Steppers against the staff side. The game was closer than expected with the staff leading 4 tries to 3 with moments remaining. However, youth won out over experience and The 6th formers scored two late tries to sneak it 5-4. The other semi-final was a much less tense affair with the Westgate Warriors securing a comfortable win against surprise package Cardiac Arrest.

The staff were able to rise to one last challenge and played some delightful rugby to ensure 3rd place overall in the competition. The final saw the two best teams in the competition playing out an epic battle, and fittingly they had both saved their best till last. Some sensational tries were scored by the Upper 6th side, that gave them a 3-2 lead going into the second half. However, Westgate Warriors pressure and some moments of individual genius allowed them to complete an impressive comeback and secure a 6-5 win. Congratulations to Sam Underhill, Tom Evans, Dom Cain, Joe Carolan and Cam Hunter.

The event was highly competitive and in very hot conditions, many thanks to all those who played and contributed to the competition. 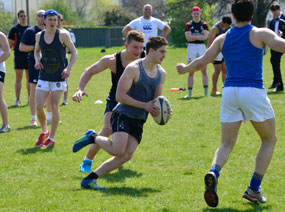 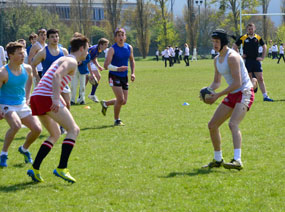 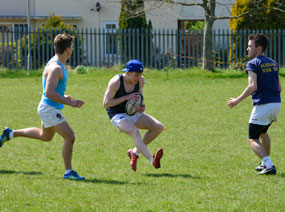