Back in July Kristof got a bronze medal at the World Games in Cali, Columbia – this is in effect the Olympic Games for non-olympic sports (incl for instance tug-of-war, rock-climbing, sumo wrestling). The difference with most competitions is that there is only 1 competitor per country allowed in the final.  The Russians didn’t send their best tumbler, so Kristof thought he stood a good chance of a bronze medal, which he did indeed achieve.  Please find attached an article from the World of Gymnastics magazine, published in October.

After the World Games came the world championships in Bulgaria: Kristof knew he would have to up his game and put out more difficult runs than he had done in Columbia.  This, however, takes time, so his aim was to get them ready for the European Championships next April.   This time the rules allowed 2 competitors per country in the final, so his realistic aim was 4th or 5th.  During the qualifiers last Friday there were 5 groups and he was in the second one.  The Russians went first and they (as all competitors did, it later transpired) struggled with the hard track, meaning they couldn’t do their runs to their best ability.  Kristof, however, is used to training at different clubs and therefore different tracks and, as a result, is better able to adjust to a different track.  After 4 groups, Kristof was in the lead!  Only the Chinese were left in the last group and they had the reigning World Champion and World Games gold medallist.  Much to everyone’s surprise and delight Kristof held on to his 1st spot!  This, however, meant that the expectations were suddenly raised.  On Sunday he managed to put down 2 solid runs again (but still playing it safe), resulting in him winning by the narrowest of margins, 0.1, and being crowned world champion. 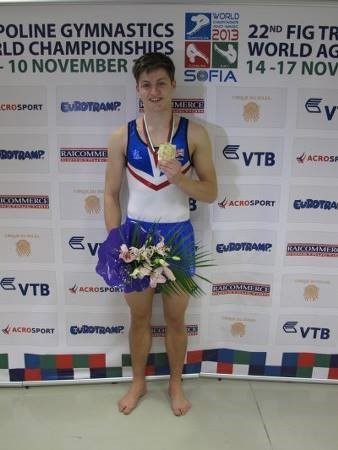