Gloucestershire Young Musician of the Year

Santos Hau is one of six of the county's top musical talents who competed for the title of Gloucestershire Young Musician of the Year. Whittled down from a record entry of 22, the six finalists performed at the prestigious Pittville Pump Room on Tuesday, February 24 before a panel of judges and an audience of civic dignitaries and guests. He gave a bold and dynamic performance of Liszt's Prelude to Transcendental Etudes and Gershwin's Rhapsody in Blue.

The judging panel was chaired by Meurig Bowen, Director of the Cheltenham Music Festival, Meurig Bowen, who played a key role in the judging of the BBC Young Musician 2014 on BBC4 TV. His co-judges were Jo Hensel, Deputy Head of Wind, Brass and Percussion at the Guildhall School of Music & Drama and award-winning cellist Gemma Rosefield.

Santos, who studies piano at the Birmingham Junior Conservatoire, was the youngest finalists, competing against undergraduates from London's Guildhall School of Music and Drama; Oxford University and the Royal Academy of Music.

Well done to Santos, as he came runner up and received a cash prize of £100. 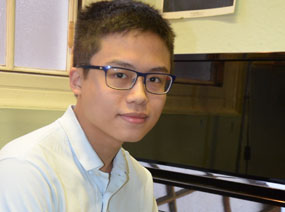