On Wednesday 26th June 2013 Michael Ashworth 9B and Theo Tolman-Michail 12T travelled down to the University of Exeter to participate in the ‘Routes into Lanaguages South West’ Regional Finals. Having already fought off stiff competition in the local rounds, both boys were placed in challenging groups at this stage. In fact, Theo had to compete against the Olympic medal winner, Tom Daley in the Post-16 non-native round. Both Michael and Theo performed extremely well and demonstrated their outstanding skills in MFL. 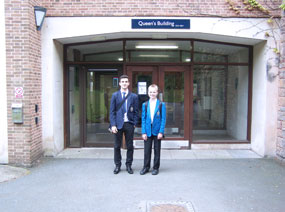