Sir Thomas Rich’s 1st XV continued their excellent run of form with a resounding 46 -22 win over a powerful Colston’s side from Bristol in Round 4 of the Daily Mail Cup. The team is unbeaten this season having won 15 and drawn 1 of their 16 matches.

Tommies took an early lead when space was created out wide for talented full-back Tom Miles who jinked through to finish a superb team try, converted by fly-half Ross Preedy, who went on to kick 4 further conversions and 2 long penalties. Some weak tackling then allowed Colston’s to take a 12 -10 lead against the run of play. Tommies’ forwards though continued to put the bigger Colston’s pack under pressure in the scrums and at the breakdown leading to the visitors infringing and fly-half Preedy punished them with another well-struck penalty. Just before half-time slick handling by the home team’s backs led to a second try for Miles and a 18-12 half-time lead.

At the start of the second half Tommies extended their lead with a converted try when the forwards drove flanker Callum Wyman over who, together with NO 8 Sam Underhill and prop George Latter, carried the ball very effectively. Shortly after, Tommies’ wing Josh Vallender scored a well-taken interception try, converted by Preedy to stretch the home sides’ advantage to 32 -12. Having built up such a commanding lead, Tommies started to play with greater confidence and fluency and a series of forward drives created the opportunity for scrum-half and captain Ollie Young to dummy his way over for his team’s fourth try, again converted by Preedy. With the score at 39 -12 Tommies made wholesale changes and whilst the new players were adjusting to the pace of the game, Colston’s , who never stopped competing hard, scored 2 good unconverted tries. However, Tommies had the last say when Young score a trade-mark, brilliant individual try which was converted by Preedy, who had an excellent game at fly-half, making the final score 46 – 22.

Tommies will now play Royal Grammar School High Wycombe away on Wednesday 12th December in Round 5. 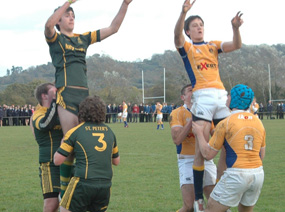