Amongst presentations in a recent assembly were two of rare significance. Oliver Young, our First XV Captain, was presented with a cap to recognise 50 appearances for the School Firsts. In fact Oliver has played 55 times for the School First Team (18 this season, 21 in 2011/12 and 16 when he was in Year 11 in 2010/11). Oliver is also the School’s highest points scorer (238 points) and has scored most tries (30). Oliver led the School team through one of their best ever seasons in which they only lost one game and achieved victories against many of the best rugby schools.

In the same assembly, Sam Underhill was presented with his England shirt. Sam played for England U16s last year against Italy and Wales, and this year Sam was given the honour of being chosen as Captain of the England U17 team in their match against France in Lyon 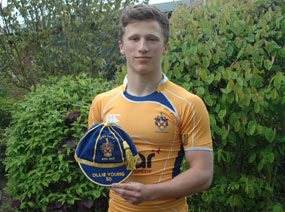