On Sunday the 30th April, three STRS students (Harry Jenkins and Ryan Birch of Year 12 and Zak Taylor of Year 9) participated in the BSKC (British Schools Karting Championship) South West and Wales regional final at Thruxton Karting Centre in Hampshire, accompanied by Mr Gowler. A total of 16 teams took part from across the region. Teams consisted of three drivers with each driver taking part in 2 races.

All three drivers put in a great performance handling the changing weather conditions during the first three races. Results included an 8th place from Harry and a superb 3rd place from Zak who started 11th on the grid. Not quite so excellent was a spin for Ryan on the first corner of his race, though he had recovered well to finish 7th by the race end.

After a short refuelling break, the second wave of races took place. Harry had a much improved second race fighting off competition from a semi-professional karter from Dyffryn Taf to finish in 4th place. Zak achieved another 3rd place finish in his second race and was unlucky not to get the race win with a close battle between the three lead drivers. Following this, Ryan went on to work his way up through the field finishing second and like Zak was unlucky not to win. Ryan also came within 0.2 seconds of breaking the track record.

The best five of the six races were taken into account giving the team a total of 86 points and 6th place overall. This was enough to see the team comfortably through to the national final which will take place at Whilton Mill on Saturday 1st July. 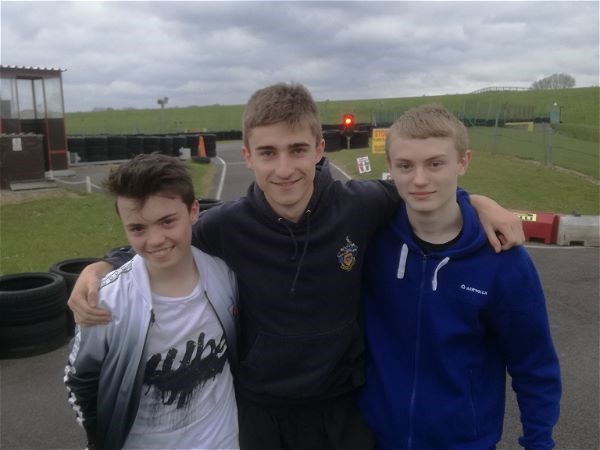