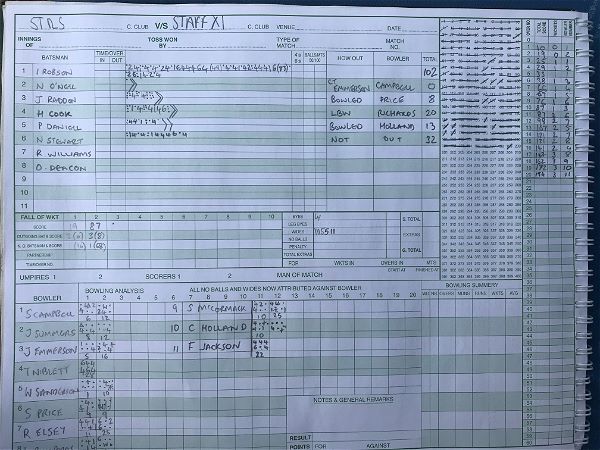 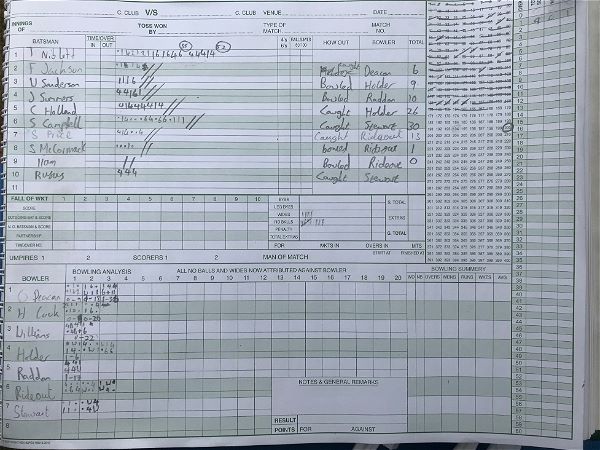 In the annual staff vs students cricket fixture, the staff triumphed for the first time in recent history after setting a large target that the students couldn't chase down.

Mr Robson ended as Man of the Match due to his unbeaten 102. This include 20 boundaries, of which four cleared the rope. Mr Raddon supported Mr Robson well in the middle, although only scored 8 runs, before Mr Cook added 20 off a similar amount of balls. Mr Daniell and Mr Stewart then came into the middle and saw out the innings with Mr Daniell getting 13 off eleven balls and Mr Stewart scoring 32 off fifteen balls, including 22 off one over to set a target of 197.

The students started well against a varied pace attack from Mr Deacon, Mr Cook and Mr Williams. Timmy Niblett got some early runs on the board securing a quick half century. Unfortunately for the students the pace slowed down with some tight bowling from Mr Holder and Mr Rideout. Mr Rideout claimed three wickets, and at one stage was on course for a hatrick. Mr Stewart took the main threat of Saxon Campbell out with some line and length bowling and clinched the final wicket of Rufus Elsey to secure the deserved victory for the staff.

It was a great match for Mr Williams, Mr Holder and Mr Cook to sign off with from their time at Tommies.