Chamber Choir and String Group competed in the Cheltenham Festival of Performing Arts on May 7th and May 9th.

Chamber Choir achieved a distinction in the Schools Choirs class and were second overall.  They impressed the audience with Peter Dorey’s arrangement of ‘Ombra Mai Fu’ by Handel and ‘The Bluebird’ by Stanford, featuring Poppy Watson singing the soprano solo.

Adjudicator Jo McNally praised the Chamber Choir for their lovely sound and balance.

String Group has a long history of success at Cheltenham Festival, winning the Norman Dark Memorial cup every year for the last five years and this year was no exception.

They impressed adjudicator Rachel Greenwood with the first movement  of Beethoven’s piano trio number 1, Op.1 .She praised the trio on their beautiful, mellow sound and lovely shaping of phrases. 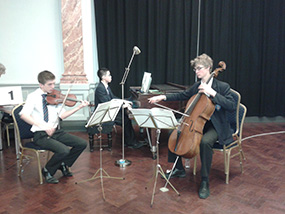 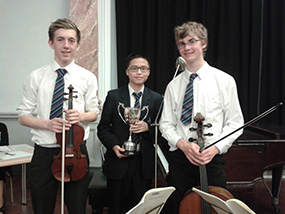