Sir Thomas Rich's U18 boys hockey team were crowned the county plate winners today. This is a magnificent achievement given only 8 of the boys play hockey regularly for a club.

The County Plate competition was created as a new competition this year for all those schools who did not want to enter the England schools competition. This involved the best from the county excluding only Dean Close and Cheltenham College.

The competition got off to a great start with a 2-1 victory over Balcarras School; the goals coming from Hartley and Edwards.

Hartley proved to be the unofficial player of the tournament putting in some tremendous displays, scoring some magnificent goals along the way. He got a double in the second game against King's School Gloucester, both reverse stick strikes that no goalkeeper would save. The second was on the final whistle to help secure a well-deserved 3-2 victory. Edwards got the other goal in that match too.

After such a good, well-earned win, the boys went straight into their third match against Pates Grammar. Many friendships had to be put to the side for this fixture and a solid defensive performance, coupled with another goal from Hartley secured a 1-0 win.

Having gained 3 wins from 3 the mood in the squad was excellent, knowing that they had a real chance of claiming the trophy. Rendcomb College were the next opponents and they were brushed aside 4-0 with goals from Hartley (2), Andre and Edwards.

Our final match was against Katharine Lady Berkeley School, but before that, we waited on the result between KLB and Pates. Only a victory for KLB would mean that the tournament would go down to the final game. Fortunately, for Tommies, Pates gained a draw meaning that we were crowned the winners with a game to spare.

The final game against KLB ended in a 2-1 defeat, Hartley getting the only goal, but this certainly did not take the shine off what was a tremendous achievement. The effort throughout the day was of the highest calibre, and despite often facing players technically better, the squad worked together with all 14 contributing to this victory.

Congratulations to the whole squad on this achievement. 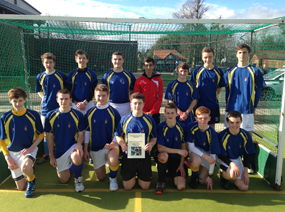