This year GCHQ and the Association for Language Learning joined forces to offer schools in the South West an exciting project. Pupils, working in small teams, were given the remit to research a town or area in a country where the target language is spoken and present to an audience, demonstrating the skills which GCHQ linguists need in their working lives. The majority of year 9 pupils took part and a winning team was identified in each class. On Friday, 10th January, the school final was held. It was now time to choose between 4 excellent presentations.
Representing 9R were James Chantler, Thomas Beeston, Gabriel Fryer Eccles and Dhilan Patel. They put together a very dynamic and snazzy presentation on Montreal, looking at climate, economics, politics and languages differences. They even involved the audience in learning some Canadian French.
The 9S team (Jack Horrobin, James Gautry, Anujan Ganeshalingam, Praseed Grover and Leo Myachalysin ) had researched Colonia Tovar in Venezuela. Founded in 1843 by German settlers, this town is an oasis of German culture and language in another continent. The presenters did not allow the audience’s attention to wander. After being quizzed on the presentation, they were rewarded with a taste of German cake.
Saura Kamath, Ethan Cowley, Matthew Kingswood, Luke Goscomb and Ryan Birch represented 9T. They chose Malaga as their research project. Alongside learning about history, geography and culture, the audience was able to enjoy the wonderful scenery and soak up the atmosphere of this popular tourist destination.
The final team to perform was 9B, consisting of Faizaan Pervaiz, Arran Bennett, Connor Howley, William Fritchie and Callum May. They held the interest of their audience with their colourful well-researched and delivered presentation of Majorca. The flamenco dance lesson was unforgettable.

The accolade of “overall school winner” went to 9B, whose entry now goes forward to the next stage of the competition. Only ten entries will be selected for the Finals which take place at GCHQ on 28th March. We wish them luck. 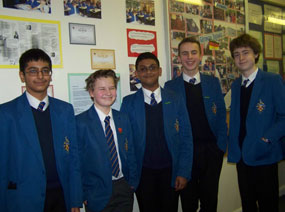 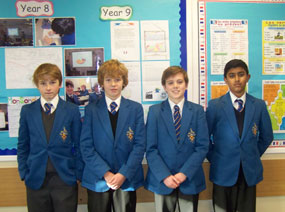 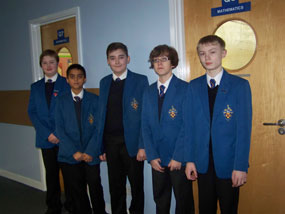